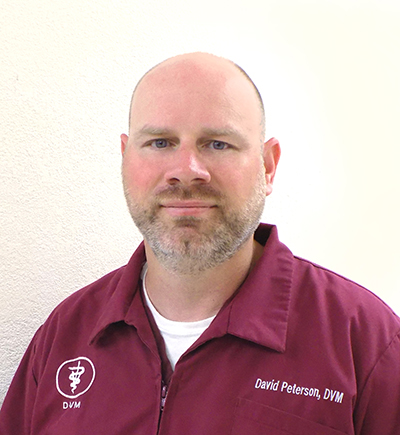 Dr. Peterson has been the owner and manager of Kings Creek Animal Hospital since May of 2010 when he purchased the practice from his grandfather, Hans Peterson D.V.M.

Dr. Peterson moved to Kaufman in 1993. He graduated from Kaufman High School in 1997, and received his Bachelors of Science in Biomedical Science from Texas A&M in 2001. He continued his education at Texas A&M where he received his Doctor of Veterinary Medicine in 2006. After graduation, he completed an internship in emergency medicine in Houston. He practiced for 3 more years at various emergency clinics in Houston and Sugar Land before returning to take over his grandfather’s veterinary practice. They rename the clinic to Kings Creek Animal Hospital.

Dr. Peterson admired his grandfather, and he had always wanted to follow in his grandfather’s footsteps in becoming a veterinarian. He could see the respect that the community gave him, and wanted to help animals like his grandfather. His favorite thing about working with animals is helping them live longer, healthier and more comfortable lives.

Dr. Peterson married Amy in 2011, and they have two children named Hans and Daniel. He also has 4 dogs (Diesel, Wolfe, Jolene and Shiner), 2 cats (Athena and Lone Star), and a saltwater fish tank.

In his free time, he enjoys spending time with his family, being outdoors, woodworking, Camaro restoration, training his Golden Retriever, and taking care of his saltwater fish tank. 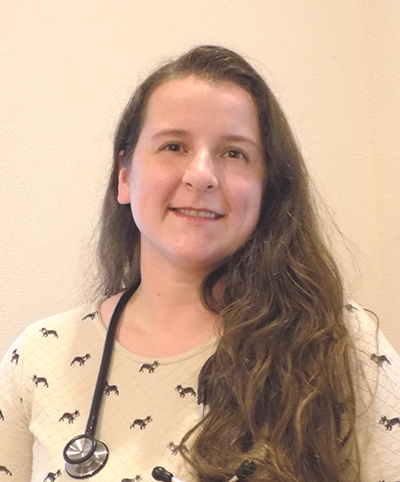 Dr. Logsdon has known since she was a child that she wanted to be a veterinarian. Her love of animals drew her to the profession, and her love for science and medicine solidified her decision to become a veterinarian. She says, “Kittens are my favorite part of any day.” She is passionate about preventative medicine and educating owners on how to best care for their pets.

Dr. Logsdon lives with her husband, Jose, and she is the mother of Sophia who is almost 2 years old. She has a Domestic Short Hair cat named Deku, a Chihuahua named Chico, and Peaches who is a Chihuahua.

In her spare time, Dr. Logsdon loves hiking and being outdoors with her family. She also enjoys crafting and playing board games. 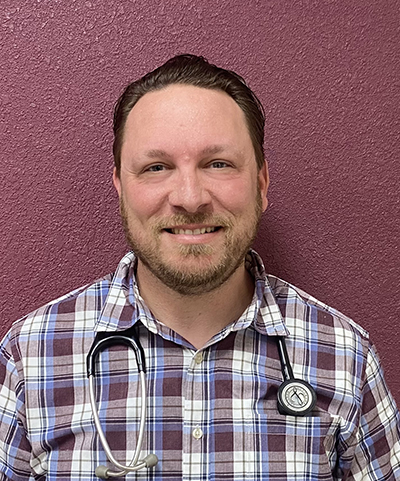 Dr. Avery joined Kings Creek Animal Hospital in May of 2020. After attending Iowa State University where he earned his Doctor of Veterinary Medicine in 2006, Dr. Avery opened his first practice in 2008. After completing multiple practice projects, he sold his primary practice in 2017.

Dr. Avery and his wife, Danielle, have four children. They have too many animals to count, including a Great Pyrenees name Cash, a young Great Dane name Ruby, house and barn cats (the family favorites), a flock of Blackbelly Sheep, chickens, ducks, horses and a donkey named Jimbo.

When he isn’t at Kings Creek Animal Hospital, he is very involved in student ministry at his church. The Averys love to travel if they can find help to cover the ranch. 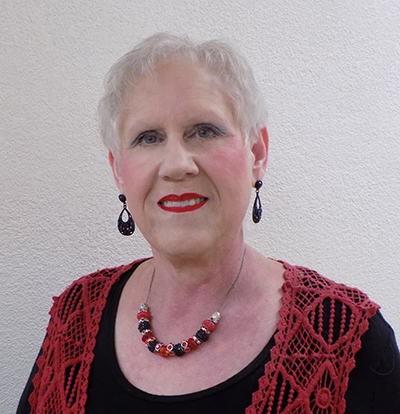 Carolyn is the Office Manager at Kings Creek Animal Hospital and has been with KCAH since February 2011. She was born in Dallas, TX and moved to several towns in the Dallas area before moving with her parents to Irving, TX where she lived until 1981. She attended Draughon’s Business College where she earned her degree as an Executive Secretary.

She began working in the veterinary industry when her son, Dr. David Peterson, took over the hospital from his grandfather. Prior to working at Kings Creek Animal Hospital, she and her husband co-owned a feed store in Kaufman. They worked along with “Grandpa Doc” in the feed store, and she was exposed to the veterinary industry through her association with her father-in-law. In 2010, Dr. Peterson purchased the veterinary business from “Grandpa Doc”. In 2011, he asked Carolyn to step in and help him manage the practice.

Carolyn and her husband, David, have been married since 1975. They have three children and ten grandchildren. When she’s not at the hospital, Carolyn loves being a wife, mother, and a grandmother. She loves spending time with her family as much as possible. She is also active at her church, and loves to shop. 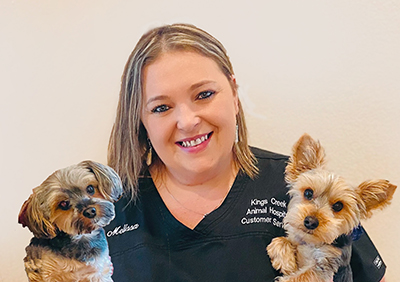 Melissa has been a CSR with Kings Creek since September of 2018. She grew up in the Kaufman area, and has spent most of her life in Kaufman.

Her love of dogs is the reason she wanted to join the veterinary industry.

Melissa lives with her fiancé, Andrew, and they have 2 dogs. Both Adaline and Church are Yorkshire Terriers. Adaline is fondly referred to as the clinic mascot.

When she’s not working at KCAH, she loves to cook/bake, travel and spend time relaxing at home with her dog. 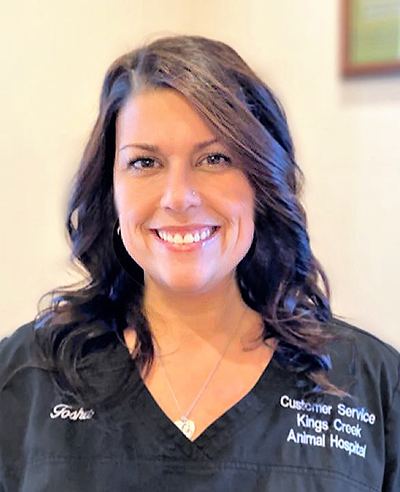 Tosha has been a CSR with Kings Creek since January of 2020. She has worked in customer service for 15+ years. Her love for animals is the reason she joined the veterinary industry.

She grew up in Wylie, TX and has resided in Kaufman since 2012. Her family has four dogs which include Bella, a Dachshund, Hunter, a Blue Heeler, Benji, a Schnauzer mix, and Mylie, a Lab.

Tosha married her husband, Chris in 2016, and they have two children Caden & Chloe. When Tosha isn’t working, she and her family enjoy hanging out, hunting, and dirt track racing. 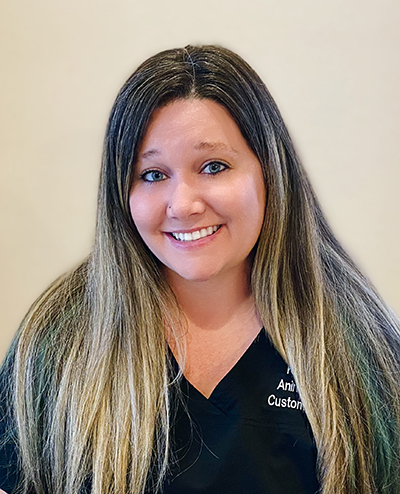 Heather joined Kings Creek Animal Hospital in 2021. She was born and raised in Scurry, Texas. She has always loved animals, and thought it would be nice to work with them. She loves visiting with the clients who come into the clinic.

Heather is married to Casey, and they have 2 daughters; one who is 21 and one who is 12. She has 4 dogs. Charlie and Dixie are Blue Lacy breeds, Justice and Whiskey are Bully breeds.

In her spare time, Heather loves to spend time with her family and travel. 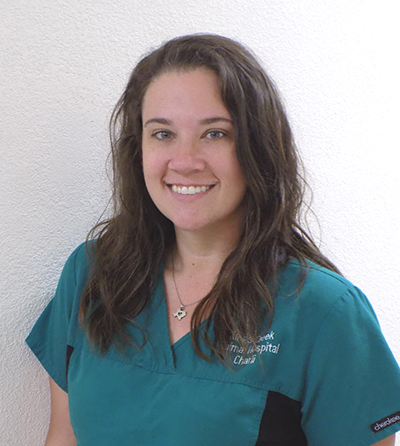 Charli has been a Vet Tech at Kings Creek Animal Hospital since 2016. She has a bachelor’s degree in Animal Science which she earned at Tarleton State University. She grew up in a small town near Kaufman.

Charli has always loved working with animals. She has always wanted to work with animals, and she has found it to be a very rewarding career. She loves being involved in helping in the health care of animals and seeing them become healthy and happy.

Charli and her daughter have 3 dogs; Lariat, Smalls, and Buddy. Lariat is a Great Pyrenees. Smalls is a Chihuahua, and Buddy is a Brittany Spaniel. 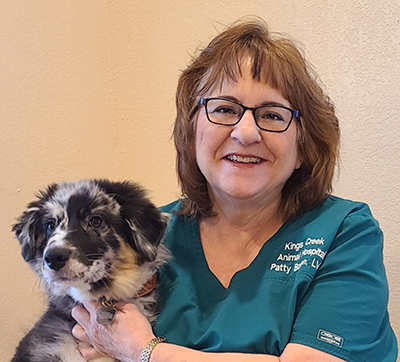 Patty is a native Texan. She has lived and worked in the Dallas area all her life. She decided to escape to the small country life, and has lived in Terrell for the last 20+ years. She decided to leave the corporate world to work with animals full-time, a career that she says is meaningful and rewarding. Patty has been a Vet Tech at Kings Creek Animal Hospital since 2018. She earned her Licensed Vet Tech degree from Dallas College-Cedar Valley Campus in 2021. Patty is a member of the Dallas County Veterinary Medical Association and the National Association of Veterinary Technicians.

In her spare time, Patty enjoys spending time with her husband and their cat, JD who is a Domestic Longhair cat. 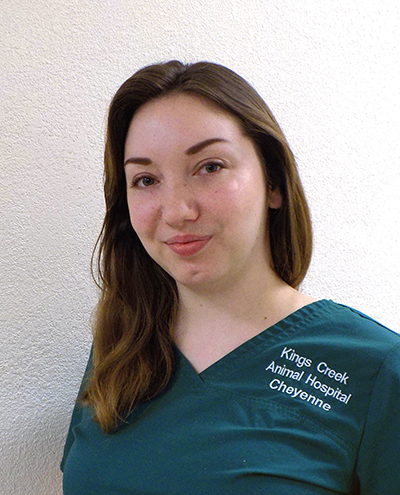 Cheyenne joined Kings Creek Animal Hospital in 2019. She moved to the Kaufman area when she was a child. After graduating from high school, Cheyenne attended Animal Behavioral College. Cheyenne did her internship at KCAH while she was attending ABC. After graduating from ABC, she worked at several other veterinary clinics. She has always loved working with animals and helping them.

Cheyenne and her husband, Cameron, have 3 dogs, 2 cats, 1 bird, and 1 tarantula. Rocky is a German Shepherd dog, Ruger is a Pomeranian, and Ember is White Lab. Her cats are Buddy and Oddball who are both Domestic Long Hair cats.

When she isn’t working, she spends time with her family and likes doing DIY projects around the house. 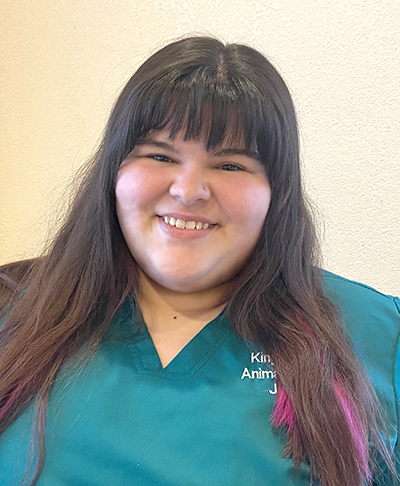 Jacey joined Kings Creek Animal Hospital in September of 2021. She was born and raised in Kaufman. She graduated from Kaufman High School. She stayed at home to help out due to a family illness. After that, she worked at Numo for 3 years. She took online courses at TVCC where she earned 3 certificates for Vet Assistant. Jacey says working with animals brings her joy. She loves being able to work with animals both healthy and ill. She loves seeing a patient get well.

Jacey lives with her mom and Dad and her two younger sisters, and she has a dog named Sugar. She also has a cat name Melon, and Leopard Gecko names Zeus.

In her spare time, Jacey loves to play video games, and drawing and Cosplay. 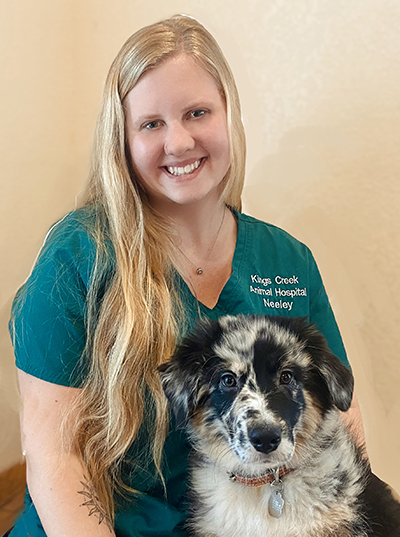 Neeley has lived half of her life in Scurry-Rosser, and she graduated from Scurry-Rosser High School. Neeley began working at Kings Creek Animal Hospital because she wanted to explore her options for a new career. She enjoys caring for the patients at KCAH. She is working on several degrees, and she loves what she does.

Neeley has three dogs; Yogi, Dolly, and Oakley. Yogi is a Great Pyrenees/Black Lab mix. Dolly is a Jack Russell Terrier, and her newest pet is Oakley who is an Aussie. Neeley enjoys going to school.

We use cookies on our website to give you the most relevant experience by remembering your preferences and repeat visits. By clicking “Accept All”, you consent to the use of ALL the cookies. However, you may visit "Cookie Settings" to provide a controlled consent.
Cookie SettingsAccept All
Manage consent

This website uses cookies to improve your experience while you navigate through the website. Out of these, the cookies that are categorized as necessary are stored on your browser as they are essential for the working of basic functionalities of the website. We also use third-party cookies that help us analyze and understand how you use this website. These cookies will be stored in your browser only with your consent. You also have the option to opt-out of these cookies. But opting out of some of these cookies may affect your browsing experience.
Necessary Always Enabled
Necessary cookies are absolutely essential for the website to function properly. This category only includes cookies that ensures basic functionalities and security features of the website. These cookies do not store any personal information.
Non-necessary
Any cookies that may not be particularly necessary for the website to function and is used specifically to collect user personal data via analytics, ads, other embedded contents are termed as non-necessary cookies. It is mandatory to procure user consent prior to running these cookies on your website.
SAVE & ACCEPT